The connections between fashion and technology merge and the boundaries between the real world and the virtual one are lost. Now it is a custom to talk about shopping online, 3D experience, augmented reality and live events. Watching the show live streaming, sitting in the front row, from your smartphone or tablet may seem absurd but it happens more and more often, that those who attend a live event are willing to share it and enjoy the video that gives details and points of view which are new to those watching live.

The plus of the live video has also convinced a well-known fashion house to choose to launch the latest collection during Pitti Immagine Bimbo in streaming, thanks to the technological support of a mobile mean. 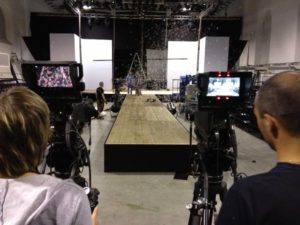 Mediacom Digital Evolution, technical partner of Mavstudio Produzioni, has allowed the airing within an hour, thanks to an equipped mobile video direction, ideal for television productions that require an agile and fast structure. The live production took place by mixing real-time shooting and sending the video in Web format network on the official website of the well-known brand.

The production of the event often requires the backstage and the creation of emotional videos, in addition to the shooting of the show. They are support materials for the marketing campaign which in this case were distributed in their official channel on You-tube and on the connected social networks.

This technology infrastructure allows a production of high quality; in fact, the movies are in high resolution, suitable to be broadcasted on large monitors. The videos of the show were played in the stores, thanks to a digital signage system.

The operators in the sector are satisfied with this new way of communicating, which represents a substantial saving for the company, that can boast of greater freedom in the choice of the location, save on the costs of logistics and accommodation of guests, equipment, etc…

Thanks to this technical solution today it is possible to easily reach customers anywhere in the world and give greater emphasis to the event prolonging the media effect.