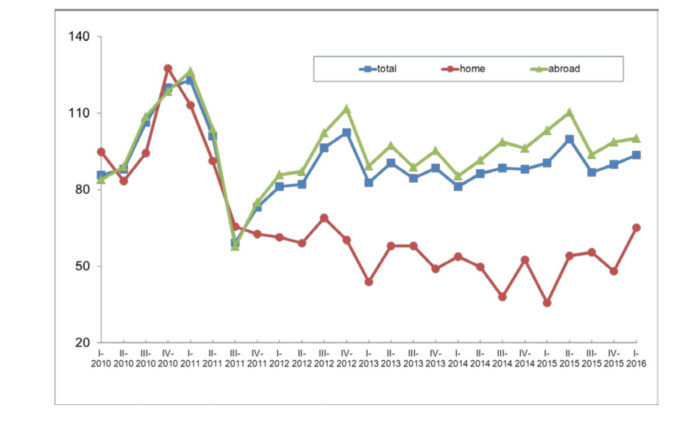 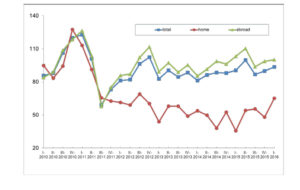 For Italian textile machinery manufacturers, the first quarter of 2016 has opened with a recovery in orders on the domestic side, according to ACIMIT, the Association of Italian Textile Machinery Manufacturers. In foreign markets, orders have instead dropped off slightly. “The recovery on the domestic market compared to the minimum recorded a year ago is highly encouraging. Abroad, only a few markets have performed well,” commented Raffaella Carabelli, President of ACIMIT, the association that represents around 300 manufacturers and producing machinery for an overall value of about €2.6 billion, with exports amounting to 86% of total sales. The orders index for textile machinery grew during the first quarter of 2016, thanks especially to a push from Italy’s domestic market. Based on an industry survey conducted by ACIMIT, during the period from January to March 2016 overall orders increased by 3% compared to the same period the previous year. The value of the index for the first quarter of 2016 came in at 93.6 points (basis 2010=100).

This growth factor regarded only Italy, where the index recorded an absolute value of 65 points (+82% compared to January-March 2015, which had recorded the lowest point in terms of orders in recent years). Abroad, the value for orders came in at 100 points, a 3% drop over the same quarter for 2015. “Many Italian textile manufacturers have returned to investing, thanks above all to the support provided by the current Government, with measures that promote the acquisition of machinery – commented ACIMIT’s President – However, the current global economic situation is not too much positive: the recovery in China in 2015 has yet to be verified, while other Asian countries, such as Bangladesh, which invested significantly last year, are showing signs of slowing down. The outlook for 2016 is spotty at best”.