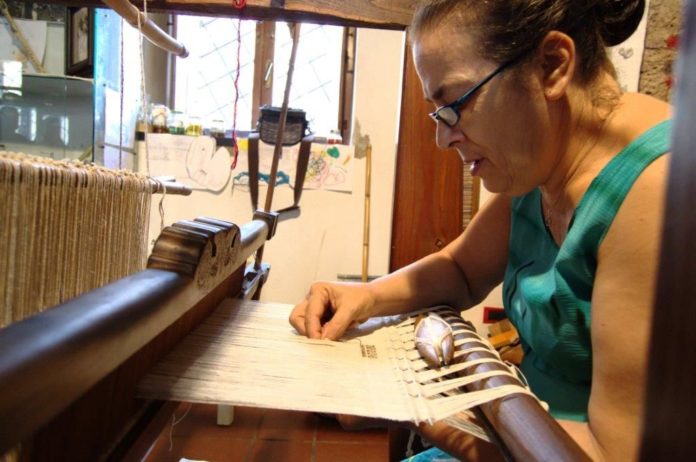 «What I do care is working with all what originates from the Earth and from Water, without disturbing neither the Earth nor the Water». Chiara Vigo explains her work which she feels like a mission: preserving and perpetuating the art of byssus weaving. As stated in the oath she made, “the water thread that belongs to everybody”.

«I was born on 1st February, 1955 – says Chiara Vigo introducing herself – of seven months, with no trigon conjunction. I am extremely outgoing. I don’t like ties or clouts of any kind. Some people say I developed a bad temper. However I am a master of trade in present times and I have accepted to spin and weave in order to be able to receive from and give the world my work. I am no craftsman and no artist. I am a master of trade. It means that I do not work to sell or to buy a product, but to preserve intact what already exists. I work in a room the Sant’Antioco Municipality made available free of charge in the Sulcis Iglesiente area, hosting the Byssus Museum (the cataloguing of its works started in 2008 and is still going on). All of my works are being donated. I do not sell them nor am I paid a salary or provided funds; donations only are welcome. All what I develop is a world heritage; as a matter of fact, in 2005 Unesco opened a file on my name, still under way, as Intangible World Heritage. My works – up to now 98 pieces – are exhibited in all museums in Italy and abroad: from Bergamo to Bolzano, from Catania to Rome, from Paris to London, Sidney, Basel, Munich, Hamburg, and as far as Russia, the country for which I am making a Vladimirska, a sacred icon of the Virgin holding her child on her lap, dressed in a byssus cloth. This is a unique kind of art in the world, however there exist no standards in my country regulating it, though eight byssus beds exist in the Sant’Antioco’s archipelago, each of them measuring three hectares… the area is not being preserved yet as a marine park».

«Sea silk – she specifies – should not be confused with byssus made of flax; the latter being something entirely different, that is a very fine gauze of linen made for the vault by Antonio Bisso in 1738. The merchandise division is quite confused on this matter and even the byssus cloth mentioned in the Holy Scriptures is not always sea silk. However, in the Book of Exodus, King Salomon’s golden clothes are clearly made of sea silk. In fact, sea silk is the solidified filament secreted by Pinna Nobilis, the dark, amber shade of which looks like gold in the sun. The byssus cloth is much thinner and lighter than silk, weightless and impalpable, so thin that one cannot feel it. It is a precious animal fibre, secreted by this big bivalve mollusk, still living on the bed of the Mediterranean Sea, however declared dying out in a decree law since 1992. The mollusk lives as long as 25 years at 5-20 m water depth. It spits a filament that solidifies; when I go to sea with biologists and midshipmen I cut the silk thread and put the mollusk back in place without damaging him. On the contrary, in the past they used to kill the mollusk. This procedure dramatically changed the way the fibre is processed and spun».

«The first difficulty one has to face concerns the filament cutting operation – she adds – a practice I introduced in 1987, when I actually accepted to make the solemn adfirmation called the “water oath”, thus receiving as  gift from my grandmother Maddalena the forms I need to process sea silk, making it shine like gold under the sun and to dye it with purple. Since then I have been preserving this practice keeping it in my mind as a memory I shall transfer orally to my second-born daughter, whose name is Maddalena like my grandmother, only provided she should accept to make the solemn water oath. Otherwise, I shall return my knowledge to the water. This practice has been preserved by my family for 30 generations now, which all I name and thank every morning in the Dawn prayer. It is a tradition, quite different from the ephemeral attempts performed in early 1900 accompanied by failed commercial projects. In fact, those who try to process sea silk without a form, to make profit, do not know what the fibre and the material really are. This way sea silk does not shine; it defibres and cannot be sold».

«In 100 open water dives – she specifies – we can get 300 grams of raw material. It means 30 grams of clean material. That is 14 metres of “Z twisted” thread. The final work takes about 5 years. In one year we can collect approximately 600 grams. Once collected, the sea silk is desalinated for 25 days, with fresh water replaced at least every three hours, day and night. Otherwise, the fibre begins to crumble. Once the fibre has dried up, it is placed in a bath of lemon and cedar juice, containing citric and tannic acid that interact with the fibre collagen making it elastic and ready to be processed, shining like gold. It will dry in the shade and in the wind, without letting it dehydrate too much. I cannot unravel so much about the dyeing process, except that for each pigmentation I only employ natural dyes. They are extracted from plants and applied without any chemical finishings like alum. This way all residues are a sort of manure that can be returned to the ground in a natural process. Hence they re-create without destroying. My needle carding device is very small and the fibre turns out shiny like gold under the sun; whereas in the past they use to apply wool carding devices on the dead mollusk, producing a darker fibre. The spinning is performed on a small spindle with a 3.5 cm diameter of the head and a stick of max. 20 cm, which produce a perfectly tight and extremely soft yarn. I still work at the loom with my nails, and do the beating-up with reed combs, for canvasses of max. 60×40 cm».