Amann, with the online platform DMIx cloud of ColorDigital, makes available to the customers a database with 100,000 colours to create innovative combinations with fabrics

A single technology has solved two of the most critical problems of the Textile supply chain: the expensive production of samples and the unambiguous identification of the colour.

Amann, the German multinational thread manufacturer that ranks among the world leaders in the production of yarns for sewing, embroidery and intelligent textiles, has entered into a collaboration with ColorDigital, another German company specialized in digital cloud solutions for digital colour and material matching for the development of clothing and objects. Last year Amann made its full range of colours digitally available to the customers with the online platform DMIx cloud of ColorDigital. So the Amann customers can speed up their colour matching.

A standard classification to identify colours in an unambiguous way

The mixing and reproducibility of colours have always been one of the most severe difficulties to be overcome in Textile and in many other manufacturing sectors where each copy of an object must be exactly the same as the original. It is a field in which chemistry has had to give more accurate answers, which has seen the study of the optical perception of colours alongside spectrometry over time.

From this point of view, fundamental was creating a standard classification of colours, the famous Pantone, which is not by chance due to a chemist, the American Lawrence Herbert. In the 1950s, he developed a translation system for each colour, identified with a unique code, in the CMYK four-colour printing system (cyan, magenta, yellow and black). Since 1963, the year in which it was made public, Pantone has established itself as the world standard for the identification of colours and, from the original 500 colours, it has reached the current 1,144 colours, which also include the so-called “Neon colours” and “Premium Metallica”.

But this is only the base, from which every creative has always started with the mixing to reach other nuances, and Amann, with its 100,000 colours available, is an example.

How to use Amann’s platform

«Having so many colours meant an enormous amount of yarn samples that had to be managed every year – explains Nadja Krautter of the Amann press office – with considerable economic and environmental costs. Only think to the necessary resources such as water, dyes, electricity, fibres to which the costs of shipping the samples to our customers, who are located worldwide, had to be added. With ColorDigital’s DMIx cloud system we have made available to our customers a platform that makes the exchange of samples useless because everything is managed online with a spectrometric colour identification system».

What happens is that the customers, from their desk, read the fabric with a spectrometric detection instrument of the colour, to which they must match Amann’s sewing or embroidery thread. Once they obtain the result, they access the German company’s digital platform with their own dedicated profile. They load the measurement, which is immediately combined with the most corresponding ones in the available colours database, divided according to the production sector.

However, the so-called “matching” of colours can also occur by loading a colour file in QTX format, a Pantone code or a LAB value for those meters that have not yet been connected to the platform. At the moment, the DMIx-enabled devices are those of X-Rite (the American giant that acquired Pantone in 2007) and Datacolor. Obviously, the customer can also carry out the reverse process to search among the available colours to create an innovative combination with his fabric.

Once the suitable colour has been chosen, it is added to a sort of cart, and the process of ordering the yarn begins, selecting the composition of the same, the quantity and so on.

Customer support and digital solutions
The solution, being available in the cloud, allows customers to use the database quickly and easily at any latitude independently. The realization took a few months, from October 2019 to March 2020, with the release of the first version and with access reserved for the most important customers. Therefore, they collaborated in verifying the functioning of the new tool.

«The pandemic – adds Nadja Krautter – has given great speed to the process of adopting the system, because suddenly everyone had to resort to much more digital tools. For each customer, we have provided an online training course so that he can fully master the instrument and thus use it to the fullest. The reactions we have recorded so far are very positive; users appreciate the ease of use and the speed with which they can combine colours between fabrics and yarns of the seams or decorative motifs. And, in a world where time has become the most critical resource, our database certainly offers an advantage over the old method of sending physical samples, as well as minimizing the use of special dyes».

ColorDigital’s solution has already been adopted by other companies in the Textile and Footwear sector, but Amann is the first thread producer in the world to have implemented it permanently. This is an important step forward for the German company, whose different types of yarns are used – other than in Fashion Apparel – also in the Footwear and Accessories sector, in the Automotive Industry, in Furnishings and Technical Textiles.

The range of fibres used varies from cotton to polyester to recycled polyamide, obtained from textile waste and dyed only with compostable dyes. Over time, technical yarns have appeared such as those based on polyetheretherketone, which resists up to a temperature of 250 degrees and the attack of bases and acids; of high-performance polyethene (robust 15 times more than steel), polypropylene (used in the filtration industry and which needs to remain unaltered in contact with chemicals) and much more including conductor and sensorized yarns. 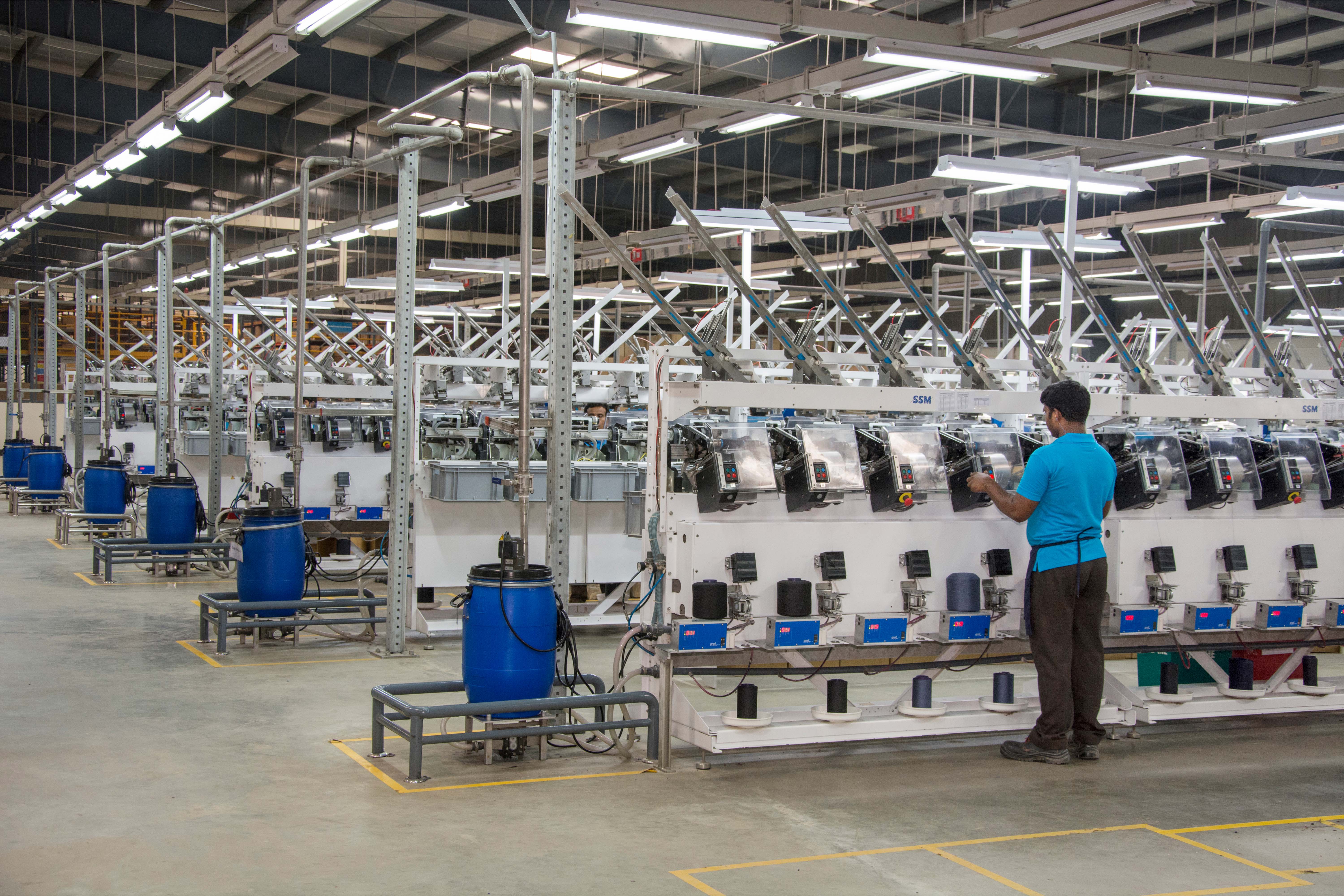 The new DMIx cloud colour matching portal also increases Amann’s already high commitment to both the use of cutting-edge machinery and environmental sustainability. Computerized mechanics is, in fact, present for measurements, for the dosage of chemical components and colours, for dyeing and the actual spinning.

In addition, the company boasts a series of quality certifications such as ISO 9001 and 14001, IATF, GRS and Standard 100 of OEKO-TEX Appendix 6. To which has recently been added the Cradle to Cradle certification, which is synonymous with consistent and continuous recycling management: it states that no waste is generated, since the products obtained with this system can be used as biological nutrients in biological cycles or be kept in technical processes as technical nutrients.

The Recycled yarn line is made with high-quality recycled materials. It offers almost the same quality characteristics as the standard range products, such as resistance to breakage, abrasion, and sewability. At the end of their life path, these yarns can be 100% composted or reprocessed.

The finishing of the sewing threads is also optimized. For example, in the production of water-repellent yarns, environmentally harmful perfluorocarbons (PFCs) have been replaced with non-polluting alternatives. A new WRe eco-friendly finish is available for some types of yarn. According to the Global Recycled Standard, Amann has also joined the United Nations Global Compact and certifies its production sites.

«We can only be satisfied with the results obtained with DMIx and the partnership with ColorDigital» concludes Nadja Krautter. «We are equipped with a powerful but, at the same time, easily accessible and usable tool, which integrates into our production system and streamlines the procedures for receiving and fulfilling orders, eliminating the phase of sampling and sending them to customers. Even in this case, we have managed to respect one of the company’s mottos: combining tradition and innovation».

Amann Group
Amann Group is a multinational thread manufacturer headquartered in Bönnigheim, where it was founded in 1854.

It counts 7 other production plants located in Germany, Great Britain, the Czech Republic, Romania, and Bangladesh, China and Vietnam for Asian customers; the construction of a 9th production plant is planned in India, in Ranipet.

Amann employes 2,500 professionists scattered between the production sites and the representative offices.