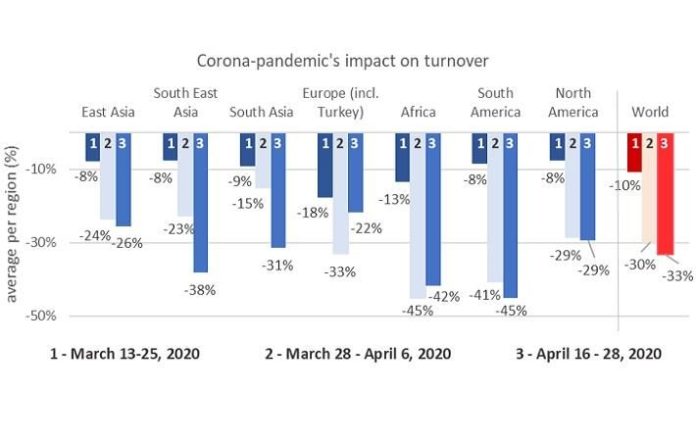 Current orders have declined by 41% worldwide, according to the third survey conducted by the International Textile Manufacturers Federation (ITMF) between April 16-28, 2020. In total 600 ITMF members and affiliated companies from around the world participated in the survey about the impact of the Covid-19 pandemic on the global textile value chain.

Orders in East Asia dropped visibly less than in all the other regions (40% and more). It can be assumed that this region, which was hit first by the Corona-crisis, is also recovering first from it. Especially China and Korea were able to contain the epidemic successfully.

The results in Europe and the other continents

The survey found that worldwide, expected turnover in 2020 is down by 33% on average compared to last year. Companies in Europe are expecting turnover in 2020 to be down by “only” 22%, a significantly better figure than the 33% decline reported in the second survey. Companies in East Asia are expecting turnover to be down by 26%, which is close to what was reported in the second survey (24%).

Turnover expectations in Africa, South America and North America have not changed much since the second survey.

As a result of the Covid-19 pandemic, companies are increasingly thinking about diversification, currently focusing on medical textiles; streamlining organisation and production processes; accelerating the reassessment of existing supply chains; and accelerating digitalization and investing in sustainable production.

Can home-made masks can be effective towards Covid-19?

New OEKO-TEX® regulations will come into effect from April 2020