IMA delivered to Area B the full Syncro Cutting Room range aiming at Industry 4.0 in terms of digitalization, automation and interconnectivity

The teamwork between two companies, both extremely keen on innovation in manufacturing and the use of Industry 4.0 ready machinery can bring major results. A good example is the supply of a full Syncro Cutting Room range to Area B, based in Piove di Sacco (province of Padua), a manufacturer of private label and licensed underwear and beachwear for top fashion brands in the world. The supplier is IMA – a company based in the Brescia area, a specialist of material handling of rolls, spreading systems, automatic cutters and software programs for the cutting room. Let us consider how they have developed the teamwork.

The relationship between IMA and Area B

«Area B – says Gian Pietro Rossi, sales manager with IMA – was already a client of ours; in the past we supplied an 853 spreading unit, IMA’s piece de resistance. They wanted to upgrade their machine system offering a line to implement the digitalized, automated and interconnected manufacturing concept aligned with Industry 4.0. They approached us as regular suppliers; after several meetings, the client gave us the go ahead to develop the concept. Having already supplied them with machinery that met their requirements was an advantage. The new solution suggested by IMA offers optimised consumption and an excellent performance, not only saving energy, but even looking at a sustainable future».

«As a high-growth company, – states Federico Venturato, CEO of Area B – we had to upgrade our machines and systems. We chose IMA because it is an important player in this field, working with dedication and proficiency, to us a cornerstone when selecting suppliers. The new range is now an integral part of our manufacturing system, it increased productivity thanks to speed, energy saving and less noise».

With the help of Gian Pietro Rossi we get a close-up look at the equipment supplied. He worked directly on the sale of this new range to the company based in the Padua area.

«Area B is a demanding customer with a quality product.  They work for top names, hence they have to offer a very high standard while maximising their performance; the IMA Syncro Cutting Room gives them the opportunity to hit both targets».

The range we supplied includes a new generation spreader, entirely digital and interfaced (type Phoenix 890 L), with a 6 m standard table and a 12 m conveyor table; together they let them handle lays without touching them, hence ensuring high precision of pieces entering the IMA Typhoon 920.70 cutter. In fact, the customer hits his production target with a consistent quality.

«Between the cutting and spreading sections, – adds Mr Rossi – we put also the 908 labelling system which operates autonomously between both stations: it reduces downtime at a minimum while ensuring top efficiency; the unit (with information for the customer, like identification of parts) places a label on the top layer of the bundles to be cut. The user saves a lot of paper that would be necessary in case of a plotter. Supplementary to the supply we delivered our CAD Maxima, a pattern making suite with the largest number of programmes on the market».

A graphic interface and functions designed on the model of the most popular design programmes, (such as e.g. Autocad) ensure an intuitive use with a very short learning time for the operator. The graphic interface is customizable, as well as short cuts and macros that allow creating a pattern from scratch in a few seconds. Proprietary files of some very popular CAD programmes are part of the game.

«Another point that makes of Maxima a unique item – says IMA Sales Manager – is the sophisticated automatic nesting algorithm that ensures highly precise efficiency rates, with a working time of less than a minute. Finally, the MTM programme automates made to measure apparel: it collects in a database personal information, measurements, patterns and purchase orders from the customers, integrates this data with PLM or ERP and automates the garment making process, from design to nesting, to cutting».

IMA’s History
Luciano Sardini and Giovanni Cartabbia, two founder shareholders of Gruppo Macpi, established IMA in 1977. From Turin they soon moved to Palazzolo sull’Oglio, where Macpi too is based, and became part of the group. The turning point for IMA came in 2008 on the one hand and in 2016 on the other. In fact, in 2008 the minority shareholders left the company, which started a new path. The split happened at the same time as the serious world economic crisis in 2009. Despite those difficulties, in just a few years IMA, guided by Luciano Sardini, succeeded in growing both in terms of turnover and of technological and manufacturing results, with a completely new range of machines. In 2007, while departing from Gruppo Macpi, IMA became autonomous; commercially, with its own sales network, well organized both in Italy and on the international market, they were able to strengthen their leading position further as suppliers of integrated cutting room solutions. With more than forty years’ experience, the company has grown so much as to gain a role of reliable and efficient technological partner, always ready to develop new solution for more and more demanding clients.

What about the strong points of the equipment? «It is mainly, – explains Mr. Rossi – a range entirely made at IMA’s premises in Palazzolo sull’Oglio. A technological solution IMA and a few competitors can deliver, thanks to the fact that all machines and cutting room management software are homemade, ensuring full control, interfaceability and interconnection between the machines. In particular, the Phoenix 890 L spreading unit was for sure a great revolution at this client’s (and beyond). The L type is a machine developed and engineered with a famous underwear brand, well known in the world. Thanks to this partnership we could examine and analyse light fabrics, typical of this industry, so as to understand its problems and difficulties, and be able to suggest and define the best solutions». 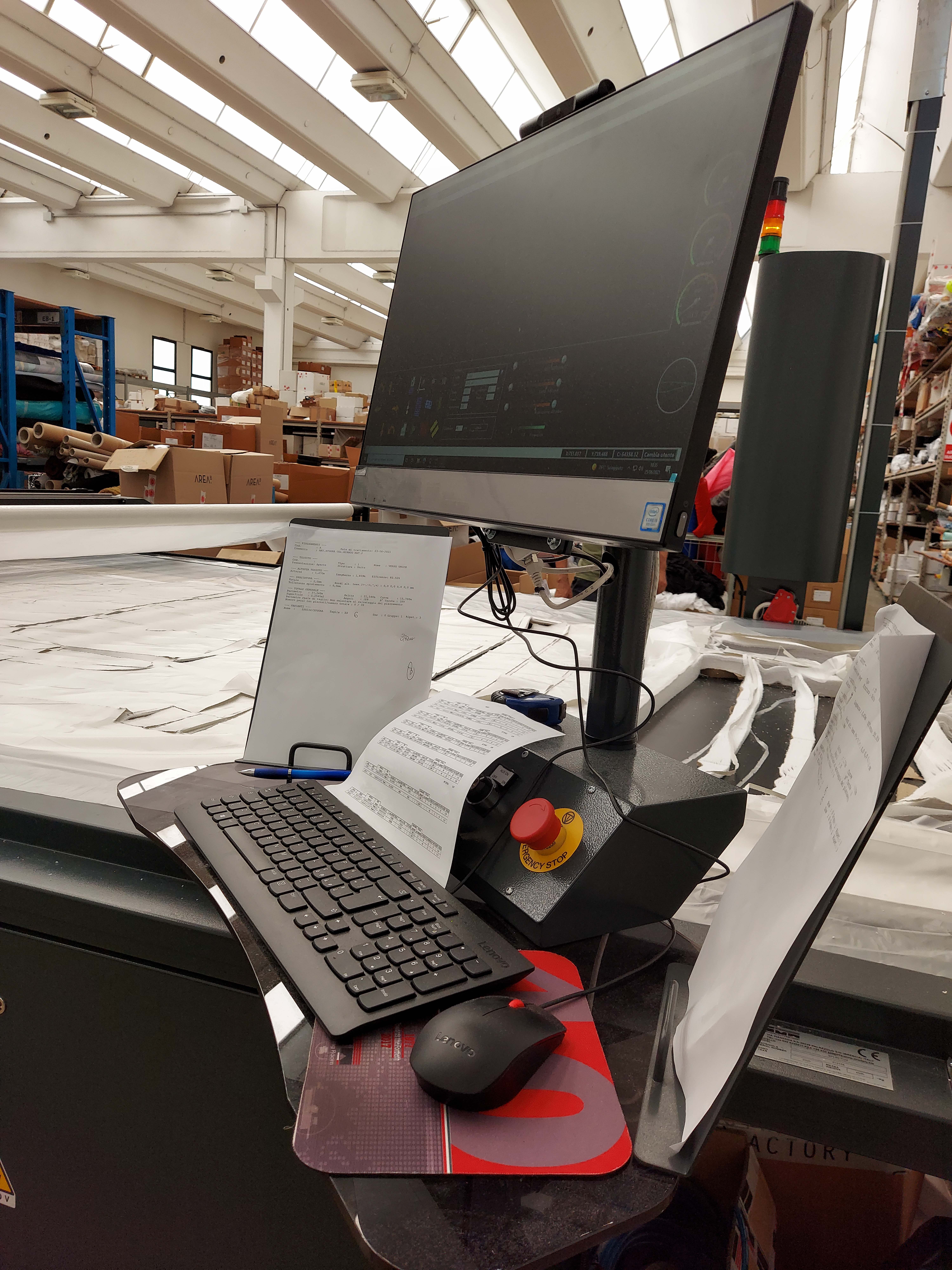 Established in 1999, operating on an over 4,000-sq.mt area in the Padua province, with a proven experience in the beachwear and underwear industry, Area B has been gaining strength over the years both as a sub-contractor and as a manufacturer under licence. In this field, the company has worked in the recent years with top players in Europe.

«As regards underwear, beachwear and activewear, – adds Mr Federico Venturato – we manufacture for big, international fashion labels, among which Alviero Martini, Missoni, Max Mara, Jacob Cohen and Dondup. The main stages of the manufacturing process take place in Italy, with the cooperation of selected firms in the Euro-Med region, China, India and Bangladesh. We offer a full service: merchandise plan, selection of materials, graphic and pattern plans, to give a brand the opportunity to concentrate on the design side of the business. A pool of approximately 600 pattern for menswear and women wear to tap into for our sketches is a strong point and a feature of our business».

«Considering the existing licences – says Mr Venturato – the record is more than satisfactory:  we grew bigger and bigger within a single licence, with +300% in SS2020 versus SS2019 and +40% SS2021 versus SS2020 as regards Karl Lagerfeld Beachwear, and +40% on flat items for Iceberg Beachwear, a licence we hold since SS2021. In terms of licences recently acquired, Bikkembergs offers an interesting perspective; besides beachwear, men underwear, loungewear and socks, starting from this year, they plan a debut in the women wear with a beachwear capsule collection».