Morgan Tecnica, based in Adro (Brescia province), a manufacturer of cutting room systems and software, has never stopped growing since it was established in 2008. Last May, they wanted to celebrate with a large number of international customers and suppliers and with their workers, a steady growth path that puts the company among a selected 6% of firms rated as the strongest in Italy with a number 1 rating certified and acknowledged for the second year in a row by Istituto Cribis. Their most powerful drive is alacrity. Joined with passion and dynamism it enabled them to face and successfully overcome the darkest years in the world economy, mainly in the fashion industry. In fact, they succeeded in achieving impressive and unexpected objectives.

As of today, they have established three subsidiaries in the world: in Bangalore and Hong Kong to manage the technical and sales business in the East and in Montreal to take care of the American region. There are also two training centres, the first one established in Bangalore a couple of years ago, the second one recently opened in Honduras. In excess of 40 international dealers cover more than 50 countries with a 95% export rate.

The Giachetti family led this path to success. After a long experience in another company in the same industry, in 2008 they decided to go on their own way. A path that started a long time ago, as Franco Giachetti, general manager of the company told us. He was the one who opened the event with his own professional experience. He started working in the ‘50’s; almost by chance in the late ‘60’s he shifted from the mechanical to the apparel industry; later the first automatic cloth spreader came, followed by the first limited company, and by Morgan Tecnica. «Today, Morgan cannot just be seen simply as a machine manufacturer – he added – in fact, we can offer a working method. We managed to find our place among highly qualified players thanks to professional competence, commitment, dedication, the wish to improve and, above all the fact of sharing the floor and measuring ourselves with mutual respect».

«My father brought some tangible innovations to this industry – Federica Giachetti, president of Morgan said -,and he wrote the history of the cutting room technology ». She then added, «We are used to work under pressure, however, this fact made us stronger and more demanding toward ourselves. We are willing to go further and to fly high. In 2008, we were a small group of fools who decided to go for an adventure up the river, up and running from the very start, with no desks and no heating, though with an incredible euphoria. At that time, some said we were risk-takers and would be finished soon. We never stopped believing in our goal, according to the «Morgan style» that sets us apart and that comes from passion, the wish to innovate, dynamism, an informal yet sincere, respectful relationship».

Since the beginning, our style involved also the third shareholder, Marco Canali. He joined the company in 2008 bringing his experience at Canali clothing manufacturer, where he was a director, and which, in subsequent periods, even after he left the family business, still remains close to a team of which he shares and values the passion, the goals and the way they work.

Understanding, following and possibly being one-step ahead of the demand of the market. Fabrizio Giachetti, CEO of the company, introduces two new products and the philosophy that inspired them. «The world has changed, the market has changed – he said; in the past the biggest fish used to eat the smaller one, today the quickest fish eats up the slower one. We have to and we want to be quick. This is the right moment to launch Next 2; in fact, less than one year ago we decided to work on this project. It is not an upgrade of previous Next 1; on the contrary, it is a completely new system. Our goal is ambitious. We want to make the best machine, a future oriented machine, to reveal the wide gap between it and the existing machines ».

The whole team gathers around the table. Each one brings his/her own skill. «We collected all ideas – he told us -, we worked them out to obtain a common feature on which we all agreed: intelligence. An intelligent system was the goal we have focused on, spending time and assets. In fact, since 2008, all our machines are ready for an Industry 4.0 certification. However, today, what makes the difference is Artificial Intelligence».

Why an intelligent machine is so important even in this segment of the industry? Let us give an example with the grinding of cutting blades. Today, the operator decides the time to grind the blade; his decision impacts some fundamental variables, like quality, productivity, reliability and operating costs. «We thought it unfair to make one operator responsible for all of it – Giachetti pointed out -. Hence, we imagined a machine that, by means of sensors and algorithms, could detect the right moment to grind the blade and to do it autonomously. A machine able to manage the speed, realising at any instant whether the actual speed might alter quality and, able to reduce or to increase it, if necessary; a machine that could detect any defects, report them and, if ignored, start a suitable procedure and prevent a crash. We imagined such a machine and now it exists! ». 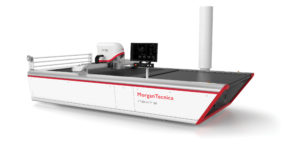 Next 2 by di Morgan Tecnica is the brand new high ply cutter, available in 5, 7 and 9 cm versions. Resulting from an accurate aesthetic and ergonomic study, focused on selected, even unseen materials, on eco leather details, new lines and shades, the Next 2 design is impactive, elegant and essential. In terms of functions, the R&D department focused on Artificial Intelligence, to meet any requirements in the cutting room, from clothing to interior decoration, from automotive to accessories. With its sophisticated sensors and complex algorithms, Next 2 is the first machine with artificial intelligence, able to manage on its own such processes as the grinding cycle or the operating speed check, at any instant, in order to ensure top quality, the highest productivity at lower operating costs. A self-diagnosis identifies and reports any troubles, hence dramatically reducing breakdowns and machine downtime.

Working together to change the market

Best of all? Being able to exploit technological innovations as an opportunity, Morgan was ready to take the risk of another important innovation: a single ply cutter based on a completely new technology, originated from what its own and other segments offer and from continuous tests and experimentation. «Besides technology, the process is also changing – Fabrizio Giachetti added – including those in the clothing industry which is more and more going toward made to measure and customized garments. It is a new wish and a new challenge: our first single ply cutter, able to meet a changing demand and to enter new, interesting markets on which we could build the growth of our company in the years to come».

A single ply cutting involves a lot of new notions and details of which Morgan was not aware. However, they were not frightened and accepted the challenge. However, they have faced it wisely! In fact, in 2015 and 2016 they met Anton Stahl, former co-owner and general manager with Assyst-Bullmer, a specialist in this industry, who has retired recently. «I had worked on such machines for several years and I would have stepped forward again only for a fully new project – Stahl explained –; I am happy of the opportunity to make my ideas available together with the Morgan team; I mean the use of linear motors, never used in this industry. It is a big challenge, and initially Fabrizio and I were the only ones who believed in it! However, we had to go beyond standard technology, to aim at speed and acceleration, as the one available on the market was not in line with our development purpose. We wanted something better. Now, I think we have achieved it. I could not believe it. An incredible team made it possible in less than one year: more than an Italian miracle, I witnessed a Morgan miracle! ».

A New Age of Single Ply Cutting
Ply 1 is the name of the brand new single ply cutting system by Morgan Tecnica, able to meet the requirements of different industry segments, from

clothing to furnishing, from automotive to the graphic industry, using natural or tech textiles and composites as well. Not only that. Latest generation linear motors enable Ply 1 to work at speed and acceleration rates that make it the quickest system in its category. 3G acceleration, max. speed 180 m/min. Very low consumption, thanks to an inverter driven suction. High performance, very high precision, extremely low maintenance, modern design, in line with Next2 design, an innovative software.