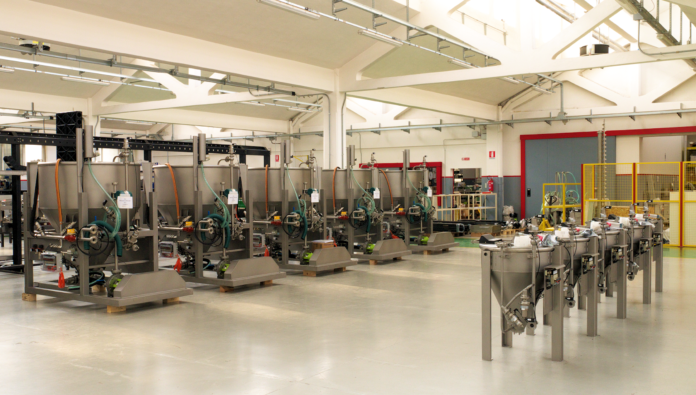 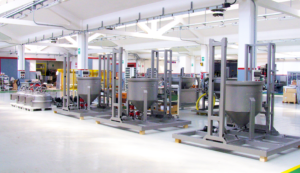 The ability to develop a system in order to meet the needs of automation, flexibility and efficiency of weighing, dissolving and transferring colorants required by industrial dye-works. And the courage to insist in proposing it to an initially cautious market. Here’s how a company from Biella was able to impose its innovative automation solutions, making it a world-recognized standard

In Italy textiles could be short of breath, but the ability to innovate and the know-how of our country’s enterprises that supply equipment for this sector in many cases still has the strength, the ability and the enthusiasm of its best years, although companies that in the past sold most of their productions in Italy, are now exporting throughout the world nearly all their design and building systems. This is the case of Lawer, a company from Cossato (Biella) specializing in design and construction of machines and automation for the textile industry. A company that since 1979,  year of its foundation, has installed over 2000 plants and dosing devices, that have contributed to make more rapid, safe and clean work in color kitchens of dye works, textile finishing and printing throughout the world. With an export rate growth from 40% in the late ‘90s to today’s 90% in countries ranging from Russia to Brazil, from China to India. Nations who buy unseen Italian technology, and especially that of Lawer, only through business negotiations. Yet the technology we’re talking about, in which the company from Biella believed in strongly since its beginning, wasn’t easy to enforce in our country for the initial distrust of local dye-works. A battle won thanks to the high quality of the proposed systems, their dozens of patents and the wide range of offered services. We talked to Federico Ormezzano, one of Lawer’s partners. 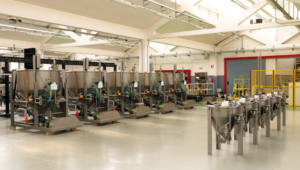 «In 1979 some friends and I took over a small enterprise from Novara that built spinning machines» says Ormezzano. «In 1984 I met Walter Lanaro, who in 1970 had founded Lawer to provide automated systems, thanks to his strong technical expertise, essentially for local dyeing and spinning. We have merged our two enterprises in today’s company, which has grown from a dozen employees to current 65 employees, with a turnover of about 10 million Euros». The first years the company from Biella used to supply machinery and automation for spinning mills, in subsequent years its development and production focused especially on automation for dye-works. An essentially virgin sector, with much space to innovate. «Our liquids’ dosing system consisting of a single tube that reaches all dye-works machines started this way», continues Ormezzano. «Although it is a standard today, we were able to impose it on the market with a lot of initial fatigue because the dyers feared that the passage of incompatible chemicals and different colors in a single tube that connects thirty or forty machines, interposing washes of course, could pollute colors and ruin the dyes. There was another automation solution on the market, which provided for a different tube for each machine, but it was expensive, complex and offered no guarantees. We have insisted in proposing our technology, which has eliminated every doubt thanks to the validity of the developed solutions. Such as no-weld joints and valves that are the cores of our one-pipe system, which we develop and build in our factory in Biella with extreme attention to quality».  Today Lawer has 80% on the market. An advantage that is not sold out, despite the initial patents are now expired, also thanks to continuous refinements of product industrialization, made possible by the large figures that the company from Biella manages, and that allow it to propose its own systems at 30% lower price compared to the past without excluding quality, constant since ever.

Automation proposed by Lawer for dye-works doesn’t consist much in reducing personnel, but in decreasing waste and increasing quality. «Today dye-works – points out Ormezzano – tend to appeal to non-skilled staff for non-skilled jobs such as loading and unloading dyeing machines, with obvious wastage due to the fact that an inexperienced operator tends to put more product quantity, when he doses by hand to be sure not to damage a dye. Within a year, waste has a big final weight on the cost of millions of Euros of chemicals and dye colors that a big dye deals with.  Automation also allows controlling every stage of the process, tracing the operations from one machine to another, having the necessary data required for ISO certification: these are the reasons that have led Italian and European companies to invest in our system, which has helped to lower prices and improve competitiveness».

The importance of services

It is not enough to have a good product to be a winning company. That’s why Lawer has always focused on its planning ability to provide targeted solutions to meet the needs of its customers and not just a machine. «We are able to provide comprehensive advice and to adapt ourselves to the needs of our customers», explains Ormezzano. «It is a big effort and continuous investment for us, but we cannot imagine another way of working except by offering to our clients all advices from in-depth analysis of their way of operating so to be sure to provide the most suitable solution for their needs». Partners, in short. Not suppliers of boxes or assemblers. The right role for an Italian company that knows everything about the needs of textiles.  Even if the customers are almost all on the other part of the world.